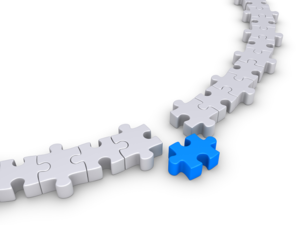 The details of the merger are explained in the previous article. Here we hope to provide further insights into how the merger agreement was promoted by management of both ARCT III and ARCP. The top executives of both companies were virtually the same persons. Nicholas S. Schorsch, Edward M. Weil, Jr. and Brian S. Block were CEO, COO and CFO, respectively, of both ARCT III and ARCP, at the time of the merger.

ARCT III commenced its IPO on March 31, 2011, for up to 150 million shares of common stock at a price of $10.00 per share. On September 28, 2012, ARCT III announced the closure of the IPO following the successful achievement of its target equity raise of $1.7 billion, including the shares reallocated from the DRIP.

On December 14, 2012, ARCT III entered into a merger agreement with an operating partnership of ARCP. On February 26, 2013, the shareholders of ARCP voted to issue shares of ARCP to the shareholders of ARCT III pursuant to the merger agreement. Also, on February 26, 2013, ARCT III shareholders voted on the merger. The proposal was approved by both REITs’ shareholders. The merger was effective on February 28, 2013. Thus, for those who purchased shares in the last month of ARCT III’s public offering for $10.00, the payoff was remarkably swift, even for those who accepted $12.00 in cash rather than shares in ARCP. We are tempted to ask if the value of ARCT III had increased so dramatically from the close of its public offering, making it a reasonably priced merger for the shareholders of ARCP, or if, perhaps, the executives had a motivation to pay a premium for ARCT III.

As we stated in the previous article, hindsight is 20:20, and fairness requires us to admit that financial forecasts and pro formas do not always materialize as expected. Nevertheless, in the case of the ARCT III merger with ARCP, the projections may have been overly optimistic.

For example, in a presentation to shareholders, the AFFO per share for the merged company was projected for 2013 and 2014. Since the future valuation of the common shares of ARCP was presented as a multiple of AFFO in another slide in the presentation, projections of future AFFO per share were a strong selling point for the merger, and for the price to be paid for ARCT III shares.

In the next slide, the multiple of 15.0X AFFO for ARCP is used to project a share price for 2013 of $13.95. What is particularly striking is the projected growth in AFFO per share from 2013 to 2014 of 16.13%. This rate of growth was to come from future property acquisitions to grow the ARCP portfolio. 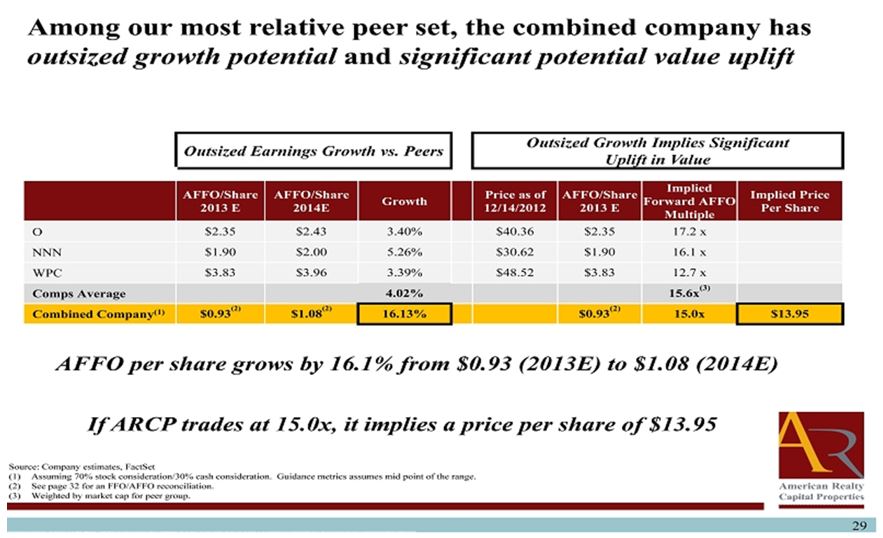 At this point, it is helpful to consider how investors who paid $10.00 per share for ARCT III stock in the public offering could see their investment grow to $12.00 per share (at a minimum) by February 2013. From the offering prospectus, the proceeds to the REIT were less than $9.00 per share, given the additional organizational and offering expenses paid by the REIT. We estimate that at September 30, 2012, the book value of ARCT III’s equity was $8.41 per share. Using just 9% debt as leverage, the REIT had total assets per share of approximately $9.43 at that date. Yet, by February 28, 2013, the shareholders of ARCP were paying $12.00 per share in cash or 0.95 shares of ARCP common stock for each share of ARCT III, valued in the stockholder presentation at $13.21 per share. 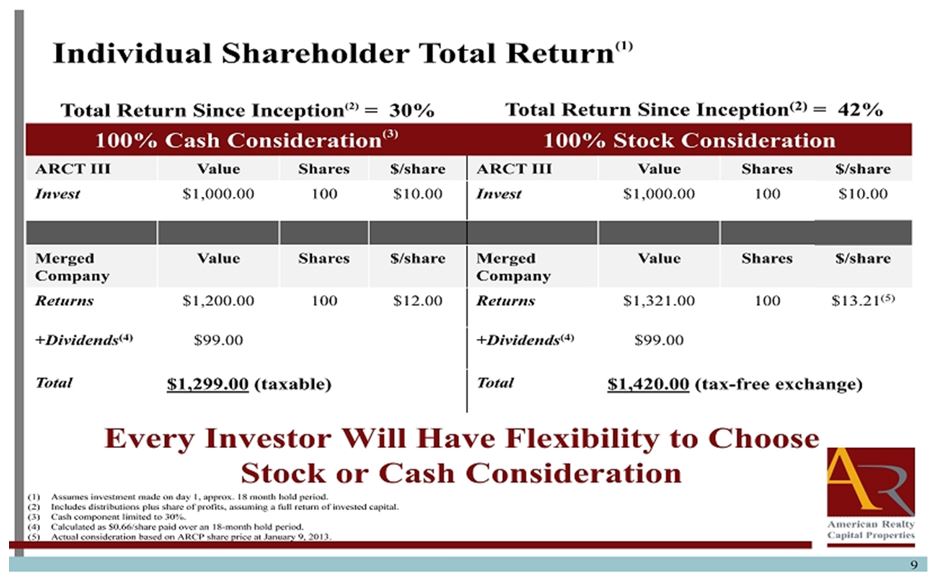 A slide from the shareholder presentation regarding the merger proposal illustrates how ARCP is paying a very impressive price for ARCT III shares, based upon an implied capitalization rate (“Cap Rate”) of just 5.8%. 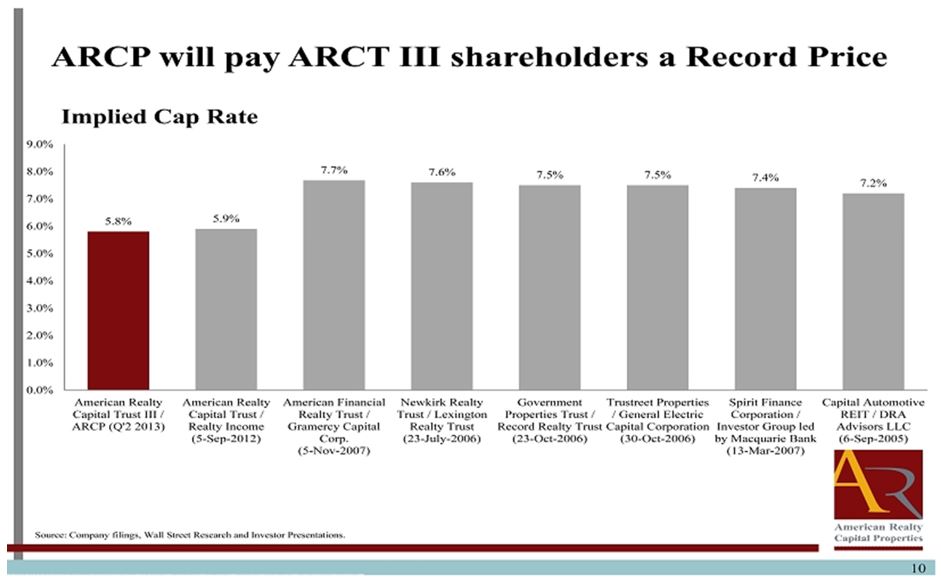 Capitalization rates are used to express the value of an investment in real estate relative to the NOI (Net Operating Income) expected to be realized in a given year. The lower the capitalization rate, the greater the value placed upon the real estate. Other things equal, if NOI is expected to grow, a lower capitalization rate can be justified. In the above illustration, it is clear that the lower cap rates are presented as evidence that shareholders are to receive a high price for their ARCT III shares, and, the implication is that the low cap rates are justified by high expectations for growth in NOI.

It is also possible that cap rate compression (lower cap rates in the market) generally had occurred between the time of the other transactions in the illustration and the proposed merger of ARCT III and ARCP. As illustrated below, cap rates indeed had declined during the life of ARCT III, but the decline wasn’t dramatic enough to result in the large increase in share values from 2011 to 2013.

What do we see in the financials of ARCP prior to and after the merger with ARCT III?

In the following illustration, we see that ARCP did grow its investment portfolio in 2013 and 2014, not just with the merger with ARCT III, but with several other major acquisitions, including Cole’s nontraded REITs. However, the projections for AFFO per share failed to materialize, and the price per share for ARCP common stock did not meet projections. In fact, with the accounting scandals that so negatively impacted ARCP’s share price, the resignations of Schorsch, Weil and Block and the change in the company name to VEREIT, the performance has been far short of what was sold to ARCP shareholders. 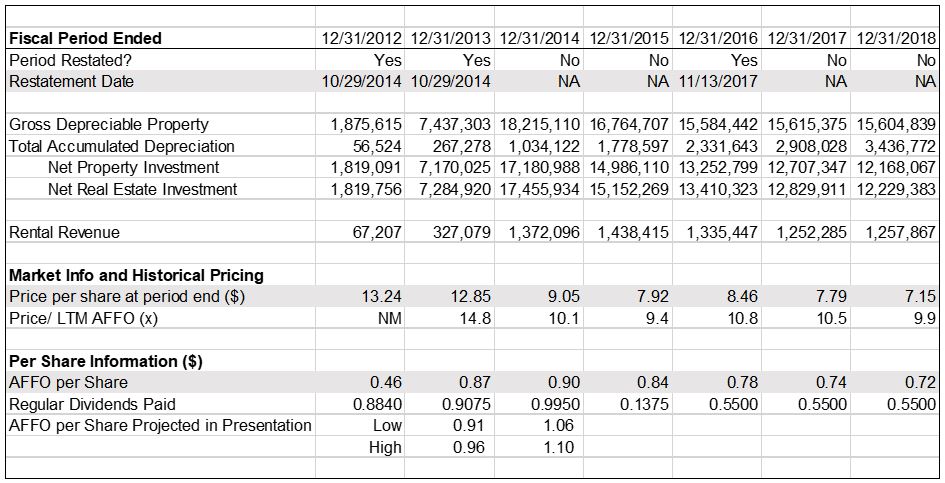 We will leave it to the reader to decide whether ARCP overpaid for the shares of ARCT III in the merger. With all of the unfortunate events that have transpired since the merger in February 2013, it is worth asking.