Black Creek Group’s Black Creek Industrial REIT IV offering led the 12 reporting NTRs with sales of $48.2 million, up from $43.6 million in August, bringing the REIT’s nine-month total sales to $847.4 million, up 272% from the first three quarters of 2019 when the REIT raised $228.0 million. Jones Lang LaSalle’s Income Property Trust had a 241% increase in September sales with $24.0 million, up from $7.0 million in August.  FS Investments raised $13.5 million for its FS Credit Real Estate Income Trust, up 56% from its August total of $8.6 million. Hines Global Income Trust had $17.3 million in sales for September, up 23% from August’s total of $14.0 million.  Only one nontraded REIT of the 12 reporting had a decrease in sales in September. All sales reported include distributions reinvested in shares of the REIT (DRIP).

Looking at quarterly totals, Hines Global Income Trust had the largest gain in sales between Q2 2020 and Q3 2020, with a 159% quarterly increase from $16.5 million to $42.8 million. The total sales by 12 reporting REITs for Q3 2020 of $287.4 million was 21% above the sales reported by 13 nontraded REITs for Q2 2020 of $237.9 million. By comparison, Q1 2020 had sales reported by 17 REITs that totaled $1,212.1 million. None of these figures include sales by Blackstone REIT which did not report and has been consistently raising capital at a rate representing over 60% of all nontraded REIT sales. Blue Vault also did not receive sales reports from Oaktree Real Estate Income Trust.

Table I shows month-to-month comparisons for those REITs reporting sales for September.

Table II shows nine-month Y-O-Y comparisons for 18 nontraded REITs that have reported sales in both 2019 and 2020.  The largest Y-O-Y increases among those REITs that were raising capital in September 2020 were for Black Creek Industrial REIT IV (272%) and Griffin Capital Essential Asset REIT (143%). 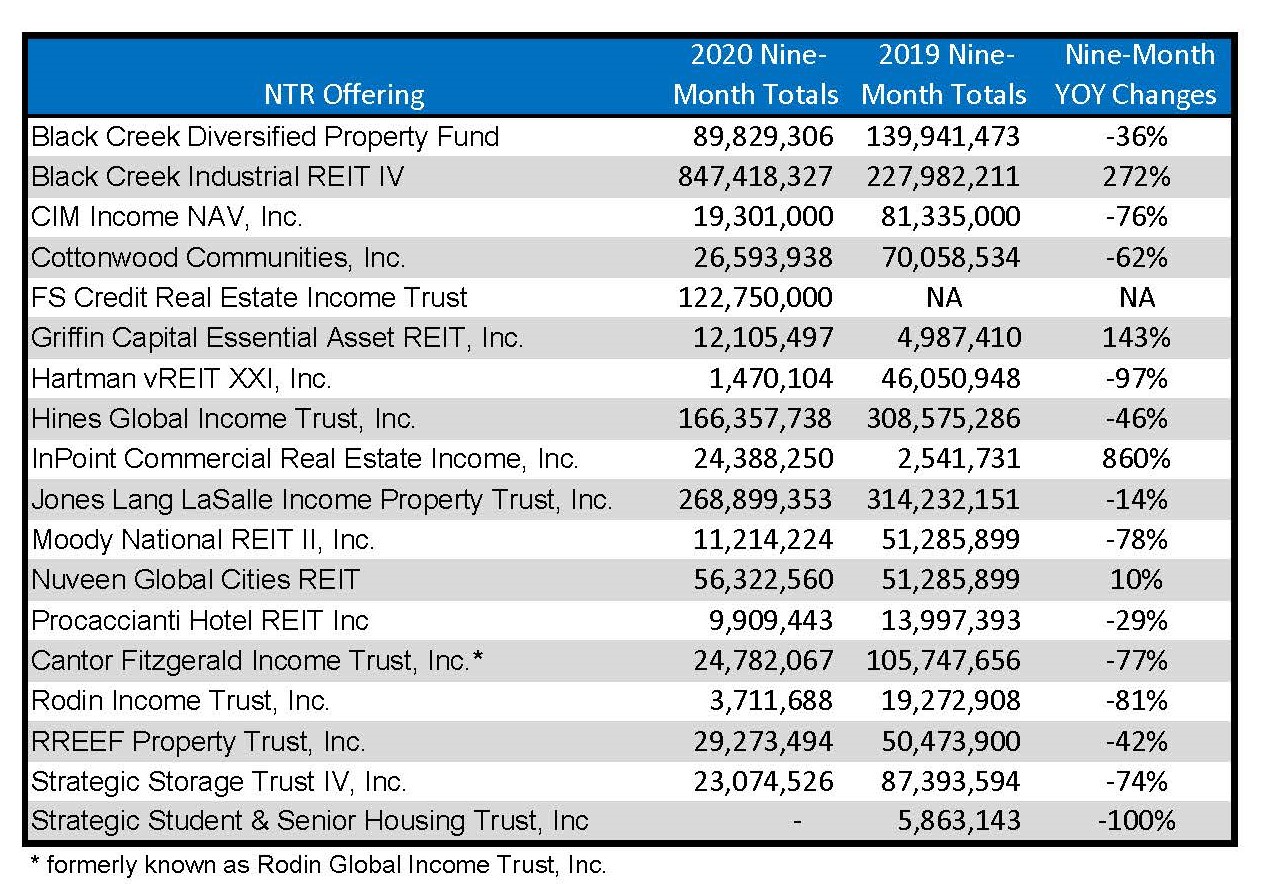 Just three nontraded BDCs were raising funds in September 2020 and reported those sales to Blue Vault. Owl Rock Capital Corporation II raised $20.81 million, up 2.6% from $20.28 million in August. MacKenzie Realty Capital reported nontraded BDC sales in September of $26,000, up 73% from $15,000 in August. Triton/Prospect’s TP Flexible Income Fund reported sales for September of $95,000 compared to $156,000 for August.  The total capital raise reported by three nontraded BDCs for September 2020 was $20.93 million compared to $20.45 million reported by those same BDCs for August.