With the impact of Blackstone REIT’s decrease in sales of 12% in June versus May, 21 nontraded REIT offerings raised a total of $354.2 million in June, a 10.3% decrease from the $396.1 million raised in May. The year-to-year comparison for June shows sales increased from June 2017 by $3.3 million or approximately one percent. Blackstone REIT raised over 63% of all capital raised by all NTRs in June.

Among the REITs with significant increases in capital raised between May and June, after Hines Global Income Trust’s 152% increase month-to-month, Rodin Global Property Trust was next with its 104% increase, followed by RREEF Property Trust’s 54% increase and Griffin Capital Essential Asset REIT II’s 20.4% increase. Interestingly, the increase in capital raised by these four REITs combined totaled just $8.9 million compared to the decrease in Blackstone REIT’s sales of $31.6 million. 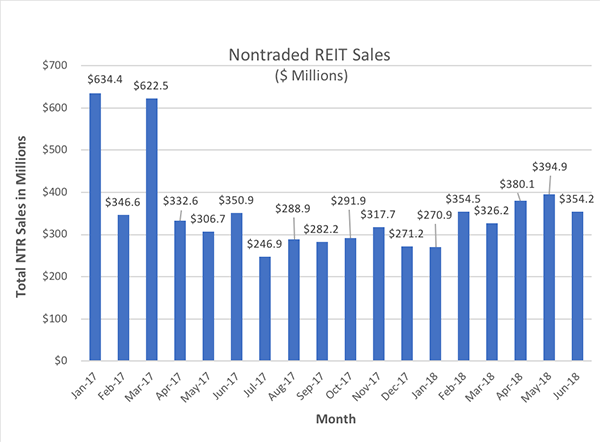