Full-cycle events within the nontraded REIT sector provide interesting and potentially valuable insights.  Whenever a nontraded REIT lists its shares on a public exchange, or merges with a listed company, the market valuation of its shares is revealed after years of reporting share prices based upon the original issue price or subsequent “NAV” reports based upon periodic third-party appraisals. In some cases, the nontraded REIT’s SEC filings may not have reported a net asset value for its shares that comes very close to approximating its subsequent full-cycle value.

For example, the merger of Griffin-American Healthcare REIT II with NorthStar Realty Finance Corp., which closed December 3, 2014, revealed a per-share value to the nontraded REIT shareholders of $11.50, compared to its previously published NAV of $10.22. On November 21, 2014, Monogram Residential Trust listed its shares on the NYSE and had a closing price of $9.25 compared to its published NAV on September 30, 2014, of $10.41.

Are there any data available to nontraded REIT shareholders prior to these full-cycle events that provide hints as to the actual values to be expected relative to reported NAVs? Maybe there are useful answers in the analyst estimates of premiums and discounts to NAVs by traded REIT property sectors published by SNL.

From a REIT manager’s point of view, the successful investment and management of a portfolio of properties could add value over time. For example, a well-managed portfolio of properties could appreciate 10% in NAV under ideal market conditions. But looking at the change in market values of traded REITs relative to their respective NAVs, both healthcare sector REITs and self-storage REITs experienced per share appreciation relative to NAVs of over 20% between September 30, 2014 and January 2015. This indicates that market timing might also play an important role in determining nontraded REIT full-cycle returns. 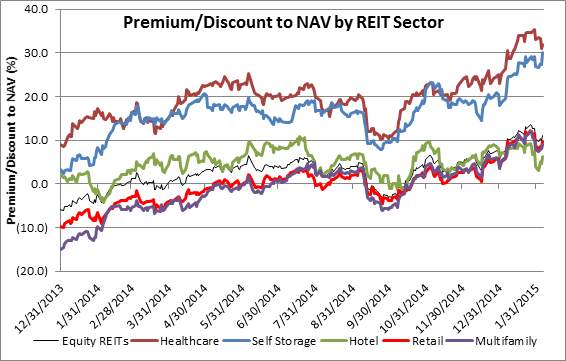 Moving forward into 2015, it might not be unreasonable to anticipate those nontraded REITs in property sectors where the public market values shares at a higher premium to NAV will look more optimistically toward a full-cycle event, either as a listing or a merger with a listed firm. As of February 5, the two sectors with the highest premiums to NAV were Healthcare (+31.9%) and Self-Storage (+30.0%).